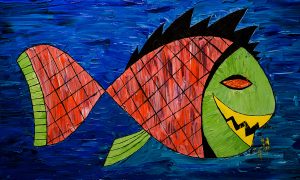 This painting was created following the severe economic sanctions, also known as ‘Bail In’, international countries and markets imposed on Cyprus in 2013. A lot of innocent people lost their fortunes that they believed were safely deposited in the country’s banks. This was a form of ‘economic war’ imposed, but more powerful nations of the West. One can see the violence on the painting which is dominated by the color red on the brush strokes and pallet knife strokes. The background of the painting is created by pages of the ‘Financial Times of the period. Oil colors on Newspaper sheets on canvas.

Brought to you by WisdmLabs: Expert WordPress Plugin Developer